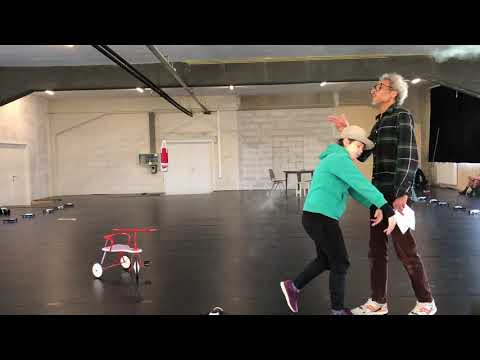 “When I tell you that I am staging the adventures of Don Quixote de La Mancha, you will understand, without even having read the two large volumes that constitute Cervantes' famous work, that this is an unprecedented production. That is the definition of an adventure. And you would be right to recognise in it a Donquichottist trait. With my actors, who have not received any training in the performing arts, I am embarking on a "quest for a lost critical mind". We will not come out of this unscathed. Cervantes ended his story by describing poor Quixote, dying breathless in his bed. It is a fictional story, which persists in probing the world's injustice. The piece I propose you to attend is a rite of passage. Together, we will discover the gestures and relationships that constitute it, and together we will join in the construction of a new world.”

Philippe Beloul's work is situated within the performing arts field, also exploring other media or platforms and develop projects with other artists, as a collaborator and as a performer. After studying dance he worked for years as collaborator and as performer. He created and performed for Les Ballets C. de la B., performed with Peeping Tom, worked with Mette Edvarsen and played in the film Somewhere in Between, Pierre Coulibeuf's film about Meg Stuart's work.